For the fall 2012 Land Stewards class at Prescott College I designed an assignment to complement the main library research essay. For the main writing assignment for the class, students were asked to pick a farming system somewhere in the world, or that had existed at some point in time and write a review of the scholarly literature available on this farming system. Students picked their farming systems early in the semester and as they were conducting their library research, I asked them to use what they had learned by mid-semester to design a board game that reflects the consequences of management decisions made by farmers in that system, both in terms of crop yields and environmental impacts. The games were geared towards high school age students and I’m hoping to give some of them a test run in Prescott high schools in the future.

I was introduced to The Farming Game by friends in the New World Agriculture and Ecology Group at Cornell. It’s a Monopoly-style game designed by growers in Washington’s Yakima Valley region. In the game, you inherit some land from an uncle who passes away and the goal is to make the farm profitable enough that you can quit your off-farm job and become a full time farmer. We played the game in class and talked about how games can be used to teach the players about specific farming systems and the management decisions involved. In the future I’d like to incorporate Pit into my teaching, a game designed in 1904 to simulate the decision making of commodities traders in the Chicago Stock Exchange. “Take that, Mom, I’ve cornered the market on Barley!”

Years ago, a friend and colleague Steve Vanek invited me to help test a farming systems game that he had designed specifically for farmers in the Bolivian Andes to learn about how their management decisions can impact nutrient management on their farms for many seasons to come. The game was simple in physical design, just consisting of different types of beans representing N, P and K (plant macronutrients), but extraordinarily complex in the potential scenarios and outcomes through a list of decision matrices; “If you spend money now to build a terrace, you will save X% of soil erosion in the future and have higher yields in the next round”. I was intrigued by how a simple set-up could convey the multi-year impact of seemingly minor management decisions made by growers. While designing the curriculum for Land Stewards, this experience came to mind and I wanted to see what the students would come up with.

I was impressed with the wide variety of very well designed games that came out of this assignment. Each game had to incorporate 20 “nuggets” of information about the farming system that had been gleaned from scholarly sources during the students’ library research. Games went through a round of internal review in a rough design format with other Land Stewards students and a round of external review wit the final versions evaluated by my first year students in Security, Equality and Ecology of Global Food Systems. What follows is just a sampling of games (there were 12 in all) and video of one of the games that didn’t use a card or board game format. 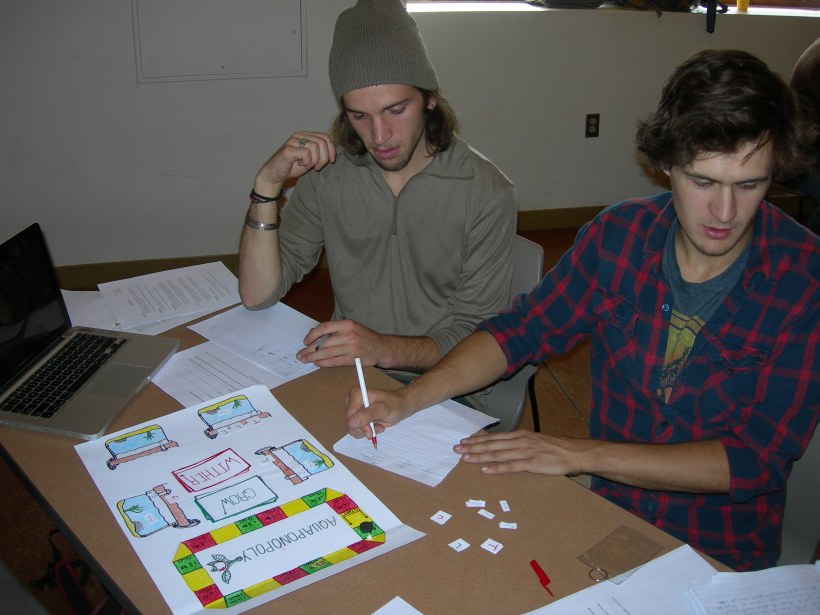 Aquaponopoly
Carrots being grown hydroponically over an aquaculture tank containing a single species of fish. Farmers can add crops and fish species as they make a profit selling their products in each cycle around the board.